Statement by the Campaign for Peace and Democracy
February 18, 2015

We Support the Greek People's Struggle Against Austerity 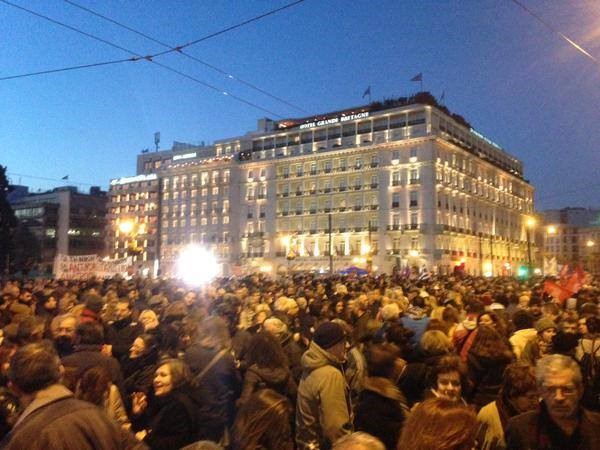 Please join in signing the statement below. Your support can make a difference.


If you have difficulty signing on, please send an email with your name to: cpd@igc.org

We Support the Greek People's Struggle Against Austerity

In the elections of January 25, the Greek people made history. We are inspired by the victory of Syriza, the Coalition of the Radical Left. In the words of Alexis Tsipras, Syriza's leader and now prime minister, "Greece leaves behind catastrophic austerity, fear, authoritarianism, and five years of humiliation and anguish." Greeks have voted for debt relief, a halt to privatization, the restoration of the minimum wage and collective bargaining, and immediate measures to address the needs of those without jobs, homes, electricity and health insurance.

We call on the governments of the European Union, the European Central Bank, and the International Monetary Fund to respect the democratic choice made by the Greek people. Furthermore, we call on them to provide relief to Greece, as well as other countries overburdened with crippling debt, and to abandon the punitive "Memorandum," with its demands on Greece for inhumane "reforms" that deprive millions of Greeks of economic and physical security.

We applaud the Greek people's courage in defying the threats and pressure applied by EU leaders and financial circles to influence the election. Greeks want to wrest control of their economy from local and foreign elites and to democratically determine their own destiny. Now that they have brought Syriza to power, this fight is far from over; it must continue on the streets, as well as in parliament. We pledge to defend the right of the Greek people to escape from the bondage of harsh neoliberal austerity and we offer our steadfast support and solidarity today and for the struggles that lie ahead.

Syriza's electoral triumph was prepared by six years of grassroots resistance, including dozens of general strikes, the movement of the squares, mobilizations against the neo-fascist Golden Dawn, and the valiant struggles of teachers, cleaners, transport workers, media workers, and many others. During those six years, and now more than ever, Greeks have fought back with great determination, offering an inspiring example to all those, throughout the world, who are being strangled by the neoliberal agenda -- a brutal program aimed at crippling unions, especially unions of public employees, reducing workers' living standards, cutting public services, drastically redistributing wealth upward, and securing the overwhelming domination of corporate and financial elites. This agenda is grinding down the vast majority of the population and fueling the rise of the far right - not only in Greece but throughout Europe.

We hope the election of the Syriza government will have a domino effect across Europe; it has already begun with Spain, where the fast-growing Podemos movement stands to make major gains in elections later this year. As Syriza's slogan puts it: "Hope is coming. Greece is going forward. Europe is changing." And we hope that its effects will be felt around the world, including the United States, where the rich and powerful have had their way for much too long. We stand with the Greek people. Their battle is also ours.