It is heartening to see, at last, the eruption of protest here at home as the Occupy Wall Street movement challenges the seemingly unchallengeable corporate control of our economic and political lives. Although OWS has for the most part not yet directly addressed issues of foreign policy, we believe that the movement can potentially create the foundation for a new democratic, just and peaceful U.S. foreign policy.

The world is in turmoil, with people around the globe rising up against inequality, insecurity, and the denial of their basic democratic rights. We at CPD are exhilarated by the audacity and courage of protesters everywhere, even as we are deeply concerned for their safety in the face of brutal repression — in Cairo, Damascus and Tehran, as well as in Oakland, New York City, and UC Davis.

These are times that call on all of us to stand together -- and thanks to your generous support, CPD has been able to contribute to the still fledgling but growing global solidarity among the new movements for social justice and democracy.

But because we receive no foundation or government grants, CPD depends completely on your individual contributions to sustain our campaigning. That's why we are asking you now to please consider making a tax-deductible gift to support our work.

Below is a list of CPD's initiatives over the past year. They embody our view that the way to build an alternative to war and oppression is to promote solidarity among movements for peace, human rights and social justice across national boundaries, within the United States and in countries whose rulers are "partners" and "friends" of the U.S. as well as those to which Washington is hostile. We hope you will take the opportunity to review these declarations. 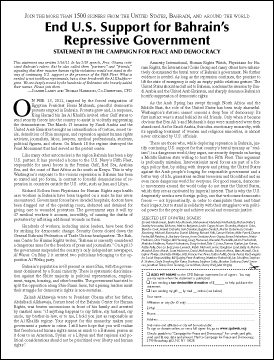 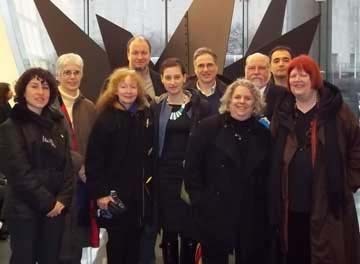 To repeat, the Campaign depends on your contributions, so please give as generously as you can. To donate through PayPal on line, visit our website . You can also mail your check made out to Campaign for Peace and Democracy. To make a credit card donation, send a note through the postal service with the amount, your credit card number, expiration date, and name as it appears on the card. Please indicate if this is a one-time donation or a contribution that recurs monthly. All donations from foreign countries must be made by U.S. money orders or checks payable in U.S. currency drawn on U.S. banks. Our address is:

Remember that donations are tax-deductible. Please let us know if you would like us to send you a self-addressed reply envelope for your donation. Thank you very much in advance for your support. We could not survive without your help.